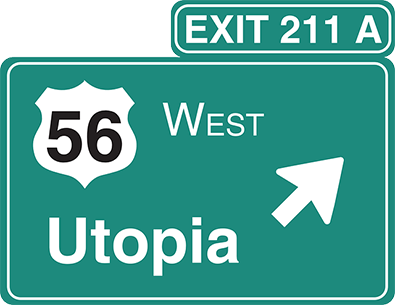 While there is no such thing in reality as utopia, although every culture in the world has a version of it – Paradise, Nirvana, Eden, and Shangri-La, etc ,it is human nature to long for perfect peace and happiness. Many of us love hearing stories of how people achieved their version of utopia. Here are just a few examples:

Arthur Ashe was the first African American to win the Wimbledon title. He overcame a physically frail childhood, racism, and poverty to find out where his passion lay – in tennis – and to achieve the highest in his game. Still revered, with stadiums named for him around the globe, Arthur Ashe will be remembered for his talent and many positive attributes, including many positive ideas such as “Start where you are; use what you have.”

Oprah Winfrey overcame sexual abuse and poverty to become one of the most beloved television personalities in history, and one of the wealthiest people on the planet. She focused on using her negative challenges as an incentive to capitalize on her gifts and become a magnificent interviewer, benefactor to girls and women, and a champion of human beings worldwide.

Stephen Hawking, despite being wheelchair bound and paralyzed with ALS, contributed vast knowledge to the sciences, never losing his humor and courage.

Helen Keller, blind and deaf from childhood, learned to write in Braille and became a profound inspiration to many without her disabilities. Her valor and tremendous good will are exemplary to generation after generation.

How do ordinary people accomplish their dreams? The following attributes are key:

“The most successful people I know have figured out how to live with criticism, to lean on the people who believe in them, and to push onward with their goals.”
Michelle Obama