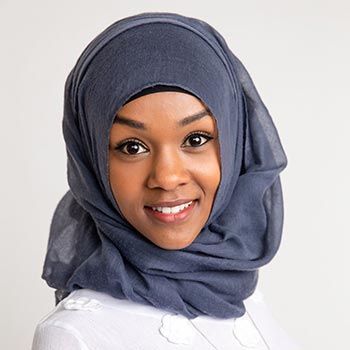 In order to escape growing violence in her native Ethiopia, Juweria’s mother sought a safe place to raise her family. They found their way to England and Sweden where she grew up and was schooled.

Her mother inspired her to learn languages. Every day they spoke a different language at home and now Juweria speaks five fluently–German, French, Amharic/Arabic, Urdu, and English. She married a man from Buffalo, NY, who brought her to the U.S. She earned degrees in city planning at the University of Buffalo where she earned a Masters degree from the School of Architecture and Planning at the University at Buffalo. She worked in City Planning at the Mayor’s Office for six years developing her expertise in Leadership, Customer Service, Teamwork, and Management. In this role, she served as a liaison between various city departments and nearly 500 block clubs, identifying and implementing neighborhood development projects, including beautification and restoration initiatives. She focused on policies that mitigate economic, gender, and racial inequalities on the development of communities, businesses and metropolitan areas

Juweria Dahir is now Executive Director of Entrepreneurship For All (EforAll), leading the organization’s development in Buffalo. There she fosters a local entrepreneurial ecosystem to engage the community from grassroots. She advises and coaches entrepreneurs and small businesses and guides business leaders to launch, build, and grow a successful company. Juweria is committed to accelerating economic and social impact in communities nationwide through inclusive entrepreneurship. She also serves as the primary spokesperson for EforAll in Buffalo.

Juweria was the recipient of the prestigious Western New York Prosperity Fellowship, which is awarded to entrepreneurial, civic-minded students. She won the 2015 Buffalo Urban League Young Professionals Community Engagement Award. In 2016 she won the Inaugural Outstanding American Muslim Millennial Award, and in 2019 received the Business First “30 Under 30” Award. To date, she is the 2021 ATHENA Young Professional Leadership Award Finalist.

Juweria now shares her time and talents in the Buffalo Niagara community. Among other activities, she leads H.E.A.L. International, a Buffalo non-profit dealing with women’s empowerment, economic development and youth enrichment programs. There she works with socially and economically disadvantaged communities, teaching life skills to augment self-sufficiency

Juweria Dahir is clearly a young woman on a fast track and living life on Purpose!