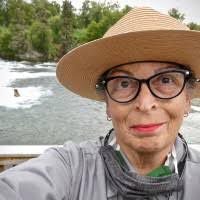 Naomi Boak was an executive producer of the award winning program The Forgetting: A Portrait of Alzheimer’s, the documentaries FAT and Through a Dog’s Eyes and the PBS series Life (Part 2). Prior to her PBS work, Naomi wrote and produced Emmy Award winning primetime children’s specials for CBS and was executive producer for the daily comedy show, Snap Judgment, on Court TV. She led television production and public television sponsorship worldwide for the IBM Corporation, was executive producer of the Lifetime Medical Television Network and was senior producer/director of the Merrill Lynch Video Network.

Aside from all those accomplishments and loving her work, life spiraled down as Naomi became ill for over two years with limited mobility or energy. To compound this difficult time, her husband of twenty years died and she lost her job that she loved for ten years.

As part of her healing in her NY apartment, she found explore.org and started to follow bear cams. The cams became instrumental in her healing. First she smiled and after awhile laughed out loud at their antics. She became addicted to the live bear cams. As she healed, Naomi found, through internet research, there was a need for media park rangers in Katmai Alaska. With little notice, she packed up, drove her dog to PA and took off for this new adventure thousands of miles away.

That is not only an overview of a successful social media campaign but also the story of a committed, talented professional who went through the depths, found a purpose, and emerged stronger, healthier and more committed than ever. A sidenote, too, are all the fans and friends she came to know through live bear cam viewers around the globe. Kudo’s Naomi!

In the picture, meet this year’s Fattest Bear, The Earl of Avoirdupois