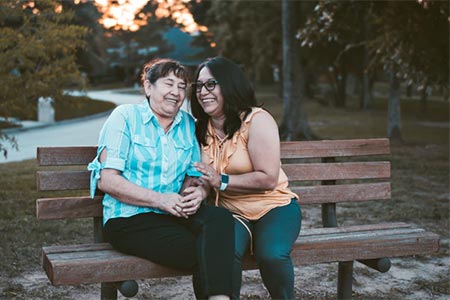 In October 1999 Bernice Bratter who was then Executive Director, Los Angeles Women’s Foundation, contacted her colleague, Helen Dennis, and inquired if anyone was doing anything about professional women facing retirement. Helen specialized in aging, employment and retirement, said “not much and let’s talk.” A four-hour lunch later ended with a decision to get a group of like-minded women together for a meal and conversation. During those discussions, Project Renewment was conceived. They created the word RENEWMENT since they didn’t’ want to use the worn-out word retirement, Look at the root word alone…TIRE…not what many career minded women aspire toward.  Because it was new, they decided on PROJECT RENEWMENT.

A survey was created and sent to colleagues nationwide to learn about diverse interests, professions, concerns, questions that were on the minds of career professionals. Very quickly they realized there were scores of talented, interesting and interested women who had much to say and learn about next life chapters. One point resonated with all…no one wanted rules or anything that appeared to be a formal meeting.

Word got out, others wanted to join.  One group started with 2, then 7, and they kept multiplying. Groups were limited to about 7-10 members or whatever number was manageable at individual homes.

A survey was sent out to learn more about the women who were attracted to the groups. They learned that the women were in their 60’s to 80’s, 70% married, 21 % single or divorced, 98% loved their work, ½ were self- employed, the other half worked for others. They were moderately concerned about finances, and they were attracted from professions like education at all levels, law, theatre, tech careers, business and more. They wanted to connect with other insightful, compassionate women also dealing with moving on, aging creatively, and finding new meaning in life.

Information gleaned from the survey led to a mission. For the first time in history millions of highly effective career women were leaving the workplace with no role models. We are pioneers. We are the first and largest group to transition from full time work and face the future unsure of personal worth without a job title. They were defined by professions they entered, the work they did, the awards they achieved.

The new challenge…create a retirement model that focuses on self, families, communities, social entrepreneurship, the nation, social justice and the greater good. Compared to men, women’s retirement decisions are more influenced by family roles and commitments. Now is a time to talk about healthy living, finances, and many dimensions of longevity.

Bernice Bratter and Helen Dennis looked at and talked about attachment to or returning to work, launching new ventures, professional Identity such as “who am I now’’ and broad community, educational and  involvement in social causes that matter.

Bernice Bratter and Helen Dennis synthesized the conversations of seven groups; Project Renewment focused on topics such as:

I Won’t Earn another Dollar; Change is the Norm; What is Productivity Anyway?; Back to the Kitchen?; Going It Alone; You Can Always Volunteer; Addicted to Power; Is Busy Better?; Anti-aging or Pro aging?; Sex, Lest We Forget; Dealing with Illness; Queen of Multitasking is taking a break; Honoring our Wisdom; Authenticity; I Can Leave home But not my Hairdresser.

RENEWMENT has matured, it is no longer a project. With groups in over a dozen US cities and interest beyond our borders including Europe and South America, Renewment continues to grow virally.

The pandemic has created a new version for renewment. It’s Renewment 2.0 -- meeting through Zoom for women who are part of a group, just curious and women in mid to later life who are interested in how they will continue to thrive in this environment and how they can contribute to a better society and world.

Renewment is 20 years old; the anniversary celebration has been postponed.  However, year 25 is already in discussion, capturing stories and growth over this quarter century.

For the next five years, Helen and Bernice envision growing and collaborating with communities of women who will support one another through transition and change…for a lifetime.