Look out sports world. It’s popular, quick, fun and is sweeping the nation…Pickleball It is one of the fastest growing sports in America and is played with a net, paddle, and plastic balls with holes similar to a wiffleball. It is often compared to tennis and badminton and is played on a tennis court with specific pickleball lines. In fact, four pickleball courts can fit on one tennis court. Doubles is the most common game although singles are also played. Rules are a bit quirky although they are easy to learn. Its popularity is proven by a 650 percent increase in numbers over the past six years, according to the USA Pickleball Association. interestingly, the biggest growth is not in the 60+ crowd but with the younger set often playing alongside adults six times their age.

The game is quick, making it a convenient way to build stamina, get regular exercise, and enjoy intergenerational play. Games in typical leagues run about 15 minutes.

The sport first caught on in the sunbelt, then 55-plus centers and RV communities. It took off and spiraled upwards from there. Today there are many municipalities, parks and recreation departments setting up courts which makes it appealing to a younger crowd. 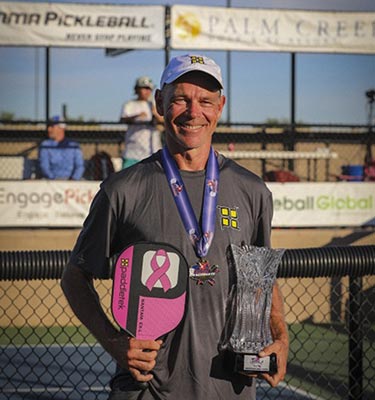 Meet Scott Moore who repurposed life from full time career to Pickleball and then to a family affair which he enjoys with two sons who have made their own marks on the game as players and trainers/teachers. Scott is a six time world triple crown winner and the #1 senior pickleball player in the world. Scott credits his success with excellent health, dominant style, long reach and quick reflexes plus his competitive spirit and drive.

Pickleball prowess runs in the family. Scott’s oldest son, Daniel, is also a top player with many successes including winning men’s doubles at the USAPA Nationals. Scott and Dan now conduct high performance intense pickleball training and clinics across the USA.

Meanwhile, Dan’s younger sibling, John, was an avid tennis player while growing up enjoying basketball and table tennis. In his 40’s he returned to tennis until he, too, discovered pickleball. He now leads a Pickleball group, conducts Pickleball clinics, is trained and certified by Paddleball Teaching Professional Association. John, too, is competitive and enjoys purpose filled time playing and helping players improve their Pickleball game.